Controlling the Number of Times a Group is Repeated

Add a question or hidden value that determines the number of times repeated.  Then drag that question into the Repeat Count setting for the repeat group question.  Note: you cannot just type a number into this box. You must drag a hidden value or question into it.

Note: If the repeat group is inside of a question list, you need to configure it to repeat a fixed number of times.

By default, CommCare will prompt the mobile worker asking if they would like to go through the repeat again after they have completed all the questions in the repeat group. 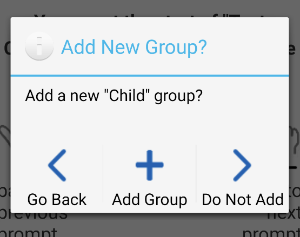 Logic Within the Repeat Group

Repeat groups can have multiple questions with the same path (ex. /data/child_repeat/name). For this reason, special functions are required when writing logic within the repeat group.

When you are referencing values inside of a repeat by default the references you make will refer to the "relative" questions inside of the group, not in the questions in the group before or after the current one.

When using lookup tables or other constructs that make use of "predicate filters" (IE: expressions with brackets like locations[@id = 'home']), the use of the current() function is necessary to reference the questions in the current group. This is because inside of the []'s, a relative reference (like ./sibling) is relative to the element which is being filtered, not the question.

The current() function translates to essentially mean the same thing as the question itself, after which two dots can be used to make a relative reference to that question.

In the lookup table's filter, you would set the value to be

this is needed because within the filter, if we had tried to reference currently_enrolled, it would refer to a field in the lookup table with that name, and not to a question in the form.

(This section assumes you are familiar with using Repeat Groups for Model Iteration.)

As mentioned above "If the repeat group is inside of a question list, you need to configure it to repeat a fixed number of times."

Imagine we had a lookup table whose items we wanted to iterate. Here is a lookup table called "bunnies", with items "Flopsy", "Mopsy", "Cottontail" and "Peter".

And here is a form that iterates them inside a question list. The relevant fields and respective values needed for this set up can be seen in the table below:

The first question in the form is a hidden value with the self-descriptive name repeat_count, whose Default Value is set to "count(instance('bunnies')/bunnies_list/bunnies)".

The second question is our question list. Inside the question list is the repeat group. Its Repeat Count is set to the first question, "/data/repeat_count".

Inside the repeat group is a hidden value named position, with a Calculate Condition set to "position(..) + 1".

So the next question in the repeat group is another hidden value called bunny, with a Calculate Condition of "instance('bunnies')/bunnies_list/bunnies[current()/../position]/name".

Logic Outside The Repeat Group

As a given path could point to multiple questions, we can use special functions to access a specific repeated value.  Using something like /data/child_repeat/name outside of a repeat group will lead to an error.

XPath nodeset has more than one node [...] Cannot convert multiple nodes to a raw value.  Refine path expression to match only one node.

To resolve, you must modify the expression so it gives a single value.  Here are some common approaches:

Generally if a given question path can point to multiple results, you can use square brackets to filter that set of results or choose a specific answer by count.

When using repeat counts, it's possible to configure the form to "delete" repeat groups added if the count changes. (IE: Repeat count was originally 5 and is now 2)

For an example: Upload this XForm to CommCareHQ

In apps with user controlled repeat counts, sometimes a user will accidentally create a repeat group which is not needed.

Physically deleting a repeat group can create confusing or ambiguous behavior in a form, and potentially error prone, since the action can't be undone. By default the mobile app prevents users from creating repeat groups. 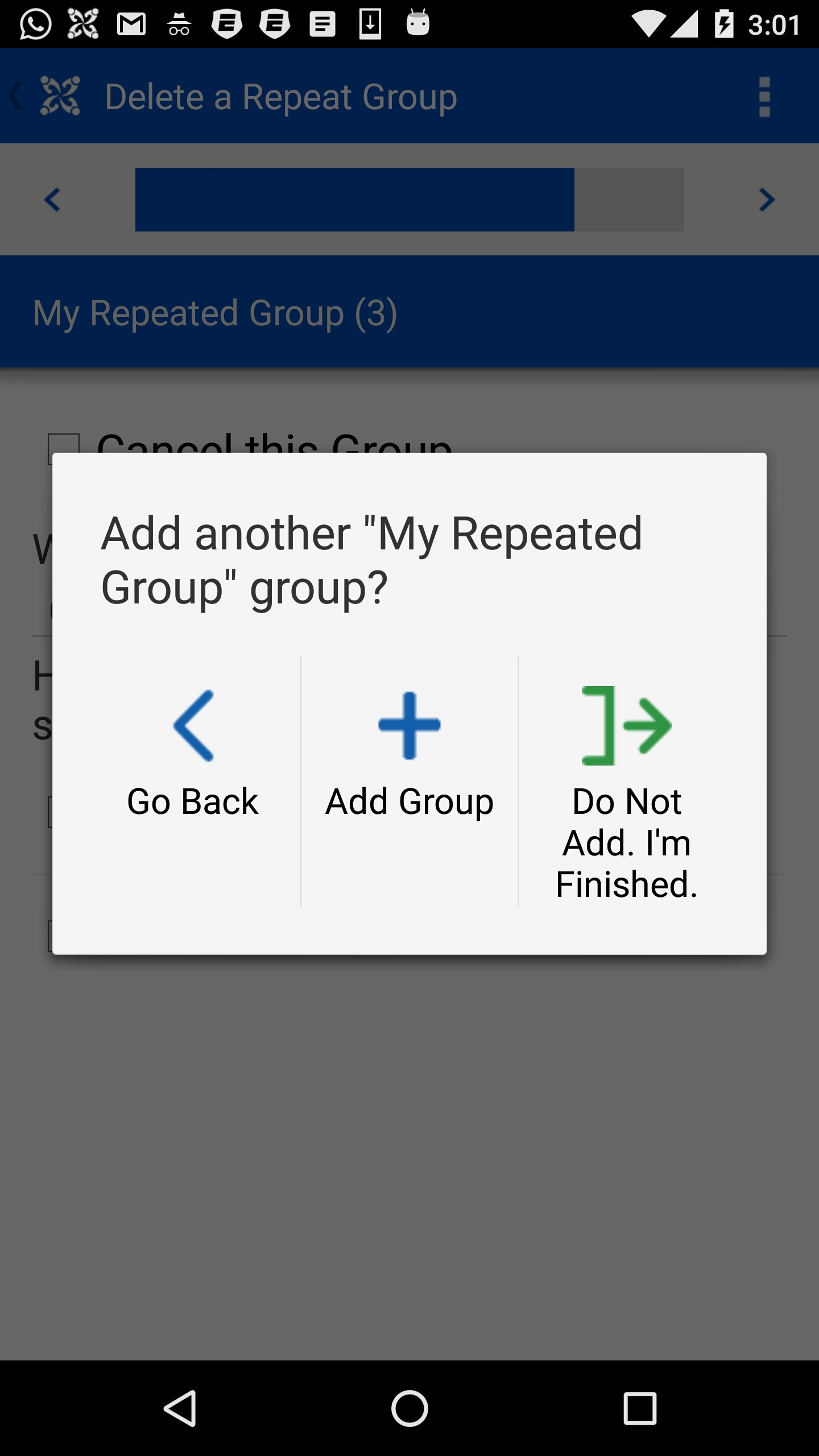 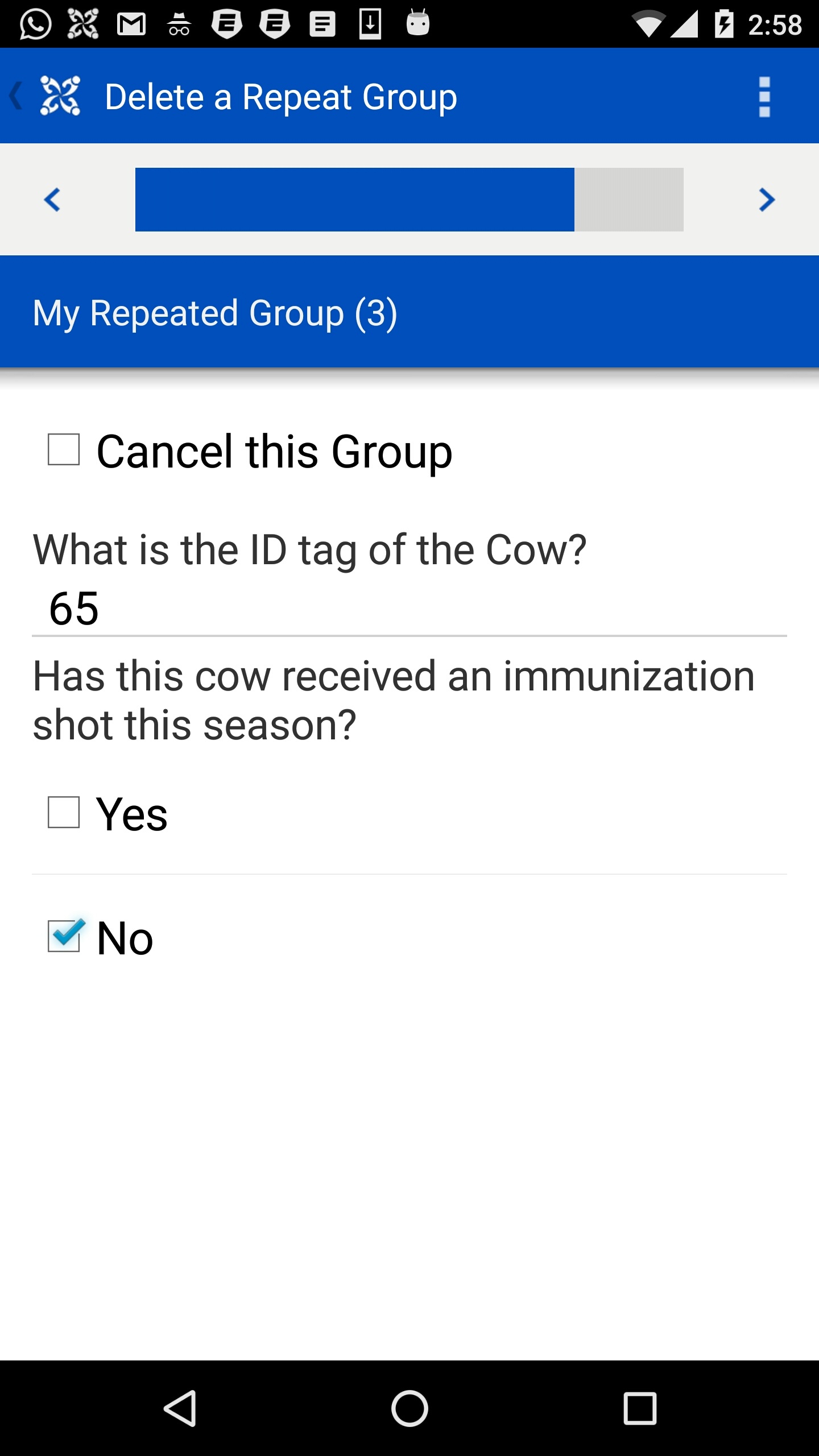 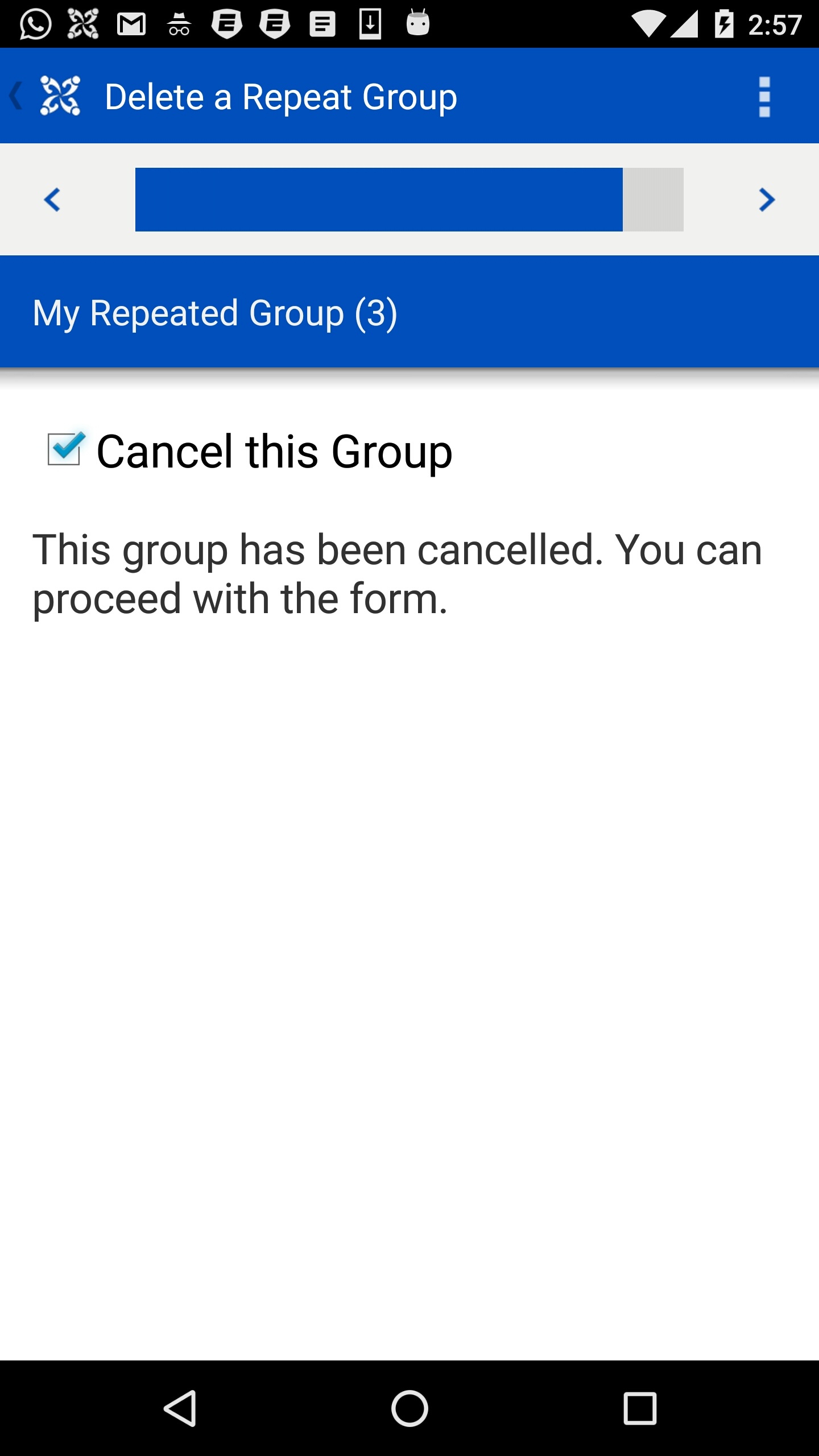